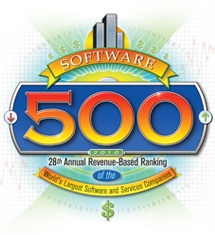 “The 2010 Software 500 results show that revenue growth in the software and services industry was healthy, with total Software 500 revenue of $491.7B billion worldwide for 2009, representing virtually flat growth from the previous year,” says John P. Desmond, editor of Software Magazine and Softwaremag.com.

“The Software 500 helps CIOs, senior IT managers and IT staff research and create the short list of business partners,” Desmond says. “It is a quick reference of vendor viability. And the online version, to be posted soon at www.Softwaremag.com, is searchable by category, making it what we call the online catalog to enterprise software.”

Go to www.Softwaremag.com and click on Subscribe to be among the first to see the 2010 Software 500. It is being released first in the digital publication, to be distributed in mid-September.

The ranking is based on total worldwide software and services revenue for 2009. This includes revenues from software licenses, maintenance and support, training and software-related services and consulting. Suppliers are not ranked on their total corporate revenue, since many have other lines of business, such as hardware. The financial information was gathered by a survey prepared by King Content Co. and posted at www.Softwaremag.com, as well as from public documents.
About Digital Software Magazine, the Software Decision Journal, and Softwaremag.com
Digital Software Magazine, the Software Decision Journal, has been a brand name in the high-tech industry for 30 years. Softwaremag.com, its Web counterpart, is the online catalog to enterprise software and the home of the Software 500 ranking of the worldâ€™s largest software and services companies. Software Magazine and Softwaremag.com are owned and operated by King Content Co.

About 3C Software
3C Software, developers of ImpactECSâ„¢ and Impact3CÂ®, was founded in 1989 and is a leader in detailed cost management systems for process manufacturers. Headquartered in Atlanta, Georgia, 3C Software serves clients in several manufacturing industries including automotive, textile and apparel, pulp and paper, semiconductor, chemical and rubber, and food and beverage. 3C Softwareâ€™s rapidly implemented solutions work with all accounting methods, are simple to maintain, and handle unlimited calculations and variables. For more information about 3C Software, visit www.3csoftware.com or call 800-226-2036.