3C Software today announced its inclusion in Software Magazine’s Software 500 ranking of the world’s largest software and service providers, now in its 29th year.  The company was ranked #483, up three spots from the 2010 rankings, with software revenue of $5.6 million. 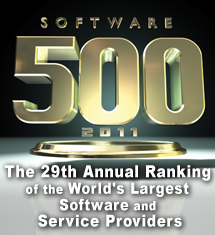 “The 2011 Software 500 results show that revenue growth in the software and services industry was healthy, with total Software 500 revenue of $541.5 billion worldwide for 2010, representing approximately 10 percent growth from the previous year’s list,” says John P. Desmond, editor of Software Magazine and Softwaremag.com.

“The Software 500 helps CIOs, senior IT managers, and IT staff research and create the short list of business partners,” Desmond says. “It is a quick reference of vendor viability. And the online version, to be posted soon at www.softwaremag.com, is searchable by category, making it what we call the online catalog to enterprise software.”

Some 27 percent of the 2011 Software 500 companies are privately held. More than 100 companies are on the list in 2011 for the first time, a reflection of the dynamic nature of the industry.

Go to www.softwaremag.com/register to subscribe to be among the first to see the 2011 Software 500. It is being released first in the digital publication, to be distributed in late September.

The ranking is based on total worldwide software and services revenue for 2010. This includes revenue from software licenses, maintenance and support, training, and software-related services and consulting. Suppliers are not ranked on their total corporate revenue, since many have other lines of business, such as hardware. The financial information was gathered by a survey prepared by King Content Co. and posted at www.softwaremag.com, as well as from public documents.

About Digital Software Magazine and Softwaremag.com

Digital Software Magazine, the Software Decision Journal, has been a brand name in the high-tech industry for more than 35 years. Softwaremag.com, its Web counterpart, is the online catalog to enterprise software and the home of the Software 500 ranking of the world’s largest software and services companies. Software Magazine and Softwaremag.com are owned and operated by King Content Co.